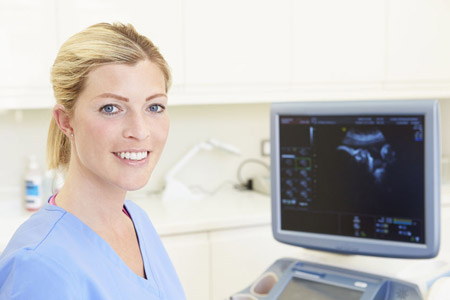 Diagnostic medical sonographers, also called ultrasound technicians, utilize medical imaging equipment in order to create images and perform medical tests. The sonogram (or ultrasound) images created of the body’s organs and tissues help healthcare professionals to assess and diagnose specific medical conditions, including diseases. Sonographers may specialize in a certain area, such as cardiac, vascular, or abdomen. To learn more about accredited ultrasound technician schools near you click your state below.

According to the U.S. Bureau of Labor Statistics (BLS), in 2013 there were 58,250 diagnostic medical sonographers employed in the United States. Of these workers, almost 35,000 secured employment at general medical and surgical hospitals, while others worked in medical and diagnostic laboratories as well as physicians’ offices. As of May 2013, California employed the most diagnostic medical sonographers, with 4,710, as well as the highest annual mean wage at $86,550. The BLS also reports that the demand for ultrasound technicians is extremely high and predicts that between 2012 and 2022 total employment may increase by 46%.

How Much do Ultrasound Technicians Earn?

Salaries for ultrasound technicians may vary depending upon location, education, industry, experience, and certification. The BLS reported that as of 2013, the median annual salary for diagnostic medical sonographers was $66,400 and the median hourly wage was $31.93. Depending on the state, technicians can earn more money; for instance, if a state has a higher demand for technicians or has fewer sonographers within a concentrated area, the pay rate may be higher.

Those who have a bachelor’s or master’s degree in a sonography concentration may also secure a higher pay because they can seek jobs in management, consulting, or education. Sonographers who have worked in the industry for several years compared to those who recently graduated, may also demand a higher salary since they have years of experience using the equipment. If sonographers hold certification in a certain specialty from an accredited institution, they may obtain a higher salary than those who practice general ultrasonography.

States with the highest wages for ultrasound technicians:

What is the Job Outlook for Sonographers?

Those who pursue careers as ultrasound technicians may decide to choose a specialty instead of performing as a general diagnostic medical sonographer. For instance, you may opt to specialize in the abdomen, where you would scan patients’ abdominal cavity and nearby organs, including the gallbladder, kidney, liver, and spleen. Another type of sonographer focuses on the musculoskeletal system, and these individuals would specialize in scanning muscles, ligaments, joints, and tendons.

The career outlook for ultrasound technicians is extremely positive, as the BLS reported that California, Texas, Florida, and New York each employed more than 4,000 ultrasound technicians in 2013. The metropolitan area of New York and New Jersey also boasted high numbers of sonographers, with more than 2,400. Most sonographers located employment at general medical and surgical hospitals, although those who worked at outpatient care centers typically earned more money with an average mean salary of $73,640 compared to those working in hospitals at $67,540.

Is Certification Required for Ultrasound Technicians?

The Commission on Accreditation of Allied Health Education Programs (CAAHEP) accredits post-secondary education programs across the country, and students who complete a CAAHEP-based program are eligible to sit for certification exams. The American Registry for Diagnostic Medical Sonography (ARDMS) is one of the most widely known licensed organizations. You can obtain certification in nine specialty areas as well as a general credential in sonographic principles and instrumentation.